The DocksTheFuture Project aims at defining the vision for the ports of the future in 2030, covering all specific issues that could define this concept including among others, dredging, emission reduction, energy transition, electrification, smart grids, port-city interface and the use of renewable energy management. The project is a Horizon 2020 Coordination and Support Action, and consist by definition of actions consisting primarily of accompanying measures such as standardization, dissemination, awareness-raising and communication, networking, coordination or support services, policy dialogues and mutual learning exercises and studies, including design studies for new infrastructure and may also include complementary activities of strategic planning, networking and coordination between programs in different countries. The project consists of five work packages and a horizontal work package on project management. 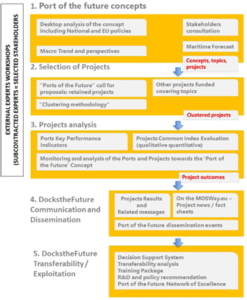 Overview of the Work Packages and their interrelation

Four main Working Packages has been designed for this project to be conducted and led by different project partners:

WP2: Selection and clustering of projects and initiatives of interest to define the clustering methodology and second to cluster retained proposals,

WP3: Evaluation: analysis of the clustered projects and activities of interest.

WP4: Dissemination and Exploitation to create a higher level of awareness and demand from stakeholders and target audience;

The work packages are related to each other. Exploitation of results to define how to transfer results and in the most effective way, delivering a number of related tools. The overall goal of the WP is to ensure efficient project management, including interfacing the European Commission. To maximize the potential for exploitation the project management structure aims at a high transparency in work progress and transfer results. Furthermore, the first work package of the project covers a non-exhaustive list of EU policies and legislations – regional, the national, European and global level that were identified during the analysis of the inputs or added by the authors. Be aware that this is just a list of EU and international policies, legislation, standards, frameworks and good practices found during the desktop study.

Ports of the future defined

In order to arrive at a definition of the port of the future, the authors had to operate within the project’s framework as defined in the grant agreement. A clear definition of a port was not supplied in the project proposal but to allow a focused desktop analysis, the following definition of a port was used: “An area on both land and water, whether on the sea or river, that provides facilities for shipping vessels to load and unload their cargo or to let passengers embark or disembark”. It is, of course, the intention at the end of WP1 to come to a clearer definition. Further on the scoping of the literature review in this WP, the following criteria were used:

The development of a formal methodology for the desktop study is a critical success factor considering the comprehensive nature of the DocksTheFuture project. The three constituent elements of the assessment methodology are the information model, the work products and the workflow.

The DocksTheFuture project proposal already contains a number of information entities such as “projects and initiatives of interests”, “topics”, “aims”, “KPI’s” etc. We renamed or restructured some entities, defined additional entities, gave entities metadata and structured the entities in an information model.  A few examples are 1- Renaming: “Projects and initiatives of interests” becomes “Inputs”, in other words, the projects studies, white papers etc, and 2- Restructuring: “Topic” remains “Topic”, however, we made it a taxonomy consisting of parent topics having child and grandchild topics, instead of a flat list as defined in the  project proposal.

2.  Work products are tools we use to perform the work. For this purpose,

3. The main steps of the workflow are:

Three Research and innovation actions are currently in a start-up phase: Corealis, Pixel and portforward. From the initial scope definition of these 3 projects, it is clear that they align well with the entities defined in the information model such as topics, tactical objectives and measures, and that consequently, the DocksTheFuture information model would be a suitable instrument to coordinate and optimise the actions taken by these projects:

Inputs are the work products that are proposed by the DocksTheFuture partners and their subcontractors to be assessed. There are 340 inputs proposed of which currently 44 have been assessed. There are different type inputs assessed such as project, strategic port plans, scientific papers, etc. Twenty-six different types of inputs have been defined. The following table shows the top ten inputs by Type. Be aware that one input can belong to more than one category.

The project proposal already addressed a preliminary research on the Port of Future concept, the definition of several Ports of the Future topics to be addressed and their related targets in 2030 and a preliminary list of projects that could be potentially clustered together with the RIA retained proposals:

As the assessment of the inputs progressed, additional topics were added, and the need for a classification of the various topics soon became apparent.

Not all topics have been assigned as frequently. The following table shows the top 10 topic assignments. Be aware that in an assessment more than one topic can be assigned.