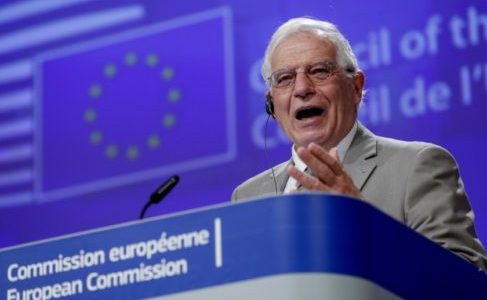 According to The Guardian Report, EU foreign policy chief Josep Borrell says end of US-led global system and Europe needs a robust strategy for Asia. The Asian century may have arrived marking the end of a US-led global system, the EU’s foreign affairs chief has said amid a growing discussion in Europe on how to weave a path between China and the US.

“Analysts have long talked about the end of an American-led system and the arrival of an Asian century. This is now happening in front of our eyes,” Josep Borrell told a group of German diplomats two months ago, adding that the coronavirus pandemic could be seen as a turning point and that the “pressure to choose sides is growing”.

In remarks that appear to confirm that the European Union will speed up a shift to a more independent and aggressive posture towards Beijing, he said the 27-nation bloc “should follow our own interests and values and avoid being instrumentalised by one or the other”.

“We need a more robust strategy for China, which also requires better relations with the rest of democratic Asia,” he added.

The EU has been reluctant to side with Donald Trump’s confrontational stance towards China, but Beijing’s assault on the independence of Hong Kong, its growing willingness to side with Europe’s populists and its refusal to open its markets has led to a change of heart, according to analysts. Margrethe Vestager, the EU competition commissioner and a key figure in how Europe will handle China in the future, has recently noted what she describes as a lack of reciprocity. “In the part of west Denmark in which I grew up, we were taught that if you invite a guest to dinner and they do not invite you back, you stop inviting them,” she explained. She said Europe needed “to be more assertive and confident about who we are”.

Borrell has previously admitted the EU has been naive about aspects of China but said this was now coming to an end. In an article published this month in many European newspapers, he urged more collective discipline towards China. Already a raft of senior politicians in France and Germany are becoming more vocal in their criticism of China, seeing echoes of Russian efforts to divide the bloc through a mixture of disinformation or pandering to rightwing populists who ideologically should be anathema to Chinese communists.

No one knows yet how far this “new realism” will take the EU in altering its economic relationship to China. Daily EU imports from China amount to €1bn (£895m), but economists say there are already signs that some trade is not returning.

In 2019, Italy became the first European country to sign a “belt and road” investment memorandum with China. Many European countries individually gave Huawei the go-ahead to run their 5G networks.

Iran at the crossroad of both corridors

Belt and Road Initiative (BRI) is a Chinese multi-layered economic, and geopolitical agenda that by which the two ends of Eurasia, as well as Africa and Oceania, are being more closely connected along two routes–one overland and one maritime. The Chinese President Xi Jinping initially proposed it in 2013. Later in 2015, the People Republic of China issued an action plan for realizing the initiative.

Formally, One Belt One Road focuses on five main areas of cooperation between involved countries:

However, infrastructure such as highways and roads, railways, seaports, energy systems and pipelines has been at the centre of attention within this initiative. The BRI brings a view of a US$1.3 trillion investment program, mostly by China, to create a network of infrastructure. It aimed to boost economic inter-connectivity and assists development across Eurasia, East Africa among more than 60 partner countries.

The new Silk Way imagines the establishment of six key economic cooperation corridors and some crucial maritime pivot points across Eurasia. In short, on land, the Initiative planned to build a new Eurasian land bridge and develop five economic corridors of China-Central Asia-West Asia; China-Mongolia-Russia; the China-Indochina peninsula; China-Pakistan; and Bangladesh-China-India-Myanmar. On the seas, the BRI will enhance jointly built, secure, smooth, and energy efficient transport routes connecting major seaports along the belt and road. Very recently, Polar Silk Road also introduced as a route, in addition to the Maritime Silk Road. Altogether, they form the “belt” and “road”.

The Silk Road Economic Belt’s overland infrastructure covers the Eurasia Land via the above-mentioned five corridors, empowered with high-speed railways and hydrocarbon pipeline networks. The ‘Belt’ corridor extends from the west of China through Central Asia to Europe. It targeted the integration of the Eurasian landmass into an interrelated economic area.

The Maritime Silk Road is concentrated on developing some ports. For the maritime ‘Road’, the seaports and hubs across the Indo-Pacific are crucial as they act to connect to land-based transportation routes. Development of port facilities across the Indian ocean in  Indonesia, Bangladesh, Sri Lanka,  Pakistan, Kenya, Tanzania, Oman and Djibouti are all according to the plan to provide maritime access for China. In the EU end, the route connects to Greek port of Piraeus which owned by COSCO the Chinese Shipping Group. It facilitates China’s  access to the European markets.

China claims that the initiative can further integrate China into the rest of the world while allowing poorer economic parts of the country to gain the benefits of its opening-up policy. In 2016, the China Daily reported that in line with the new BRI Initiative, China has established 75 overseas economic and trade cooperation zones in 35 countries as part. However, the new silk ways are still immature and strive for external endorsement and support.

At a meeting of the International North-South Transport Corridor (INSTC) coordination council in Tehran, it was announced that capacity on the corridor would be increased. Iran’s Minister of Roads and Urban Development said that the increase would be achieved by expanding railway and port infrastructures. He added that member states had agreed to create a joint company, including government representatives, for the corridor to increase capacity, subject to the necessary political will to proceed with the plan.

The International North-South Transport Corridor (INSTC) is a 7,200 km long multi-modal network of ship, rail, and road routes for the transport of freight between India, Iran, Afghanistan, Armenia, Azerbaijan, Russia, Central Asia, and Europe. The objective of the corridor is to increase trade connectivity between major cities such as Mumbai, Moscow, Baku, Astrakhan, Tehran, Bandar Abbas, and Bandar Anzali.

The aim of the corridor is not just to increase trade between member countries, but also to standardize tariffs and customs duties.

The foreign ministers of Romania, Azerbaijan, Georgia, and Turkmenistan have this week signed a declaration for the promotion of a multimodal corridor for the transport of goods between the Black Sea and the Caspian Sea (Caspian Sea – Black Sea International Transport Corridor project – ITC-CSBS). It will link the ports of Constanţa (Romania), Poti (Georgia), Baku (Azerbaijan) and Turkmenbashi (Turkmenistan).