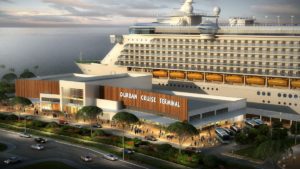 A new cruise terminal is a perfect opportunity to build in features that ensure long-term sustainability. Whereas existing terminals often struggle to retrofit green technologies, with a new development it is possible to plan effectively from the ground up.

The busy commercial Port of Durban in South Africa is about to embark on just such a project. Popular for its beaches as well as easy access to mountains and game lodges inland, Durban is now set to exploit growing interest in cruise with a dedicated terminal, but not at the expense of the environment.

In 2013, the Transnet National Ports Authority (TNPA), which manages the eight commercial seaports in South Africa, announced plans for the new KwaZulu Cruise Terminal (KCT). After three rounds of bidding, in June 2017, a joint venture between MSC Cruises SA and Africa Armada Consortium – an investment company established under South Africa’s black economic empowerment regulations – was selected as the winning bidder.

According to Andrew Pike, head of ports, transport and logistics at Bowmans, a legal firm that is advising MSC Cruises and KCT on the bid, initially MSC Cruises will own 70% and Africa Armada Consortium 30%, with the proportion of ownership set to change in Africa Armada Consortium’s favour over the next 15 years. “KCT will wholly finance, build and operate the facility over the full term of the concession, which is 25 years, then hand it back to TNPA,” he says

“We’ve definitely seen growing demand, with annual passenger numbers at the Port of Durban having increased by 22% from 171,510 in 2015 to 209,712 in 2016,” says Shulami Qalinge, chief executive, TNPA. “An estimated 1.3 million passengers are expected by 2040 and the province of KwaZulu-Natal and city of Durban want to grab an even bigger slice of this projected market. This would hinge on our continued investment in the improvement of our maritime infrastructure, skills development and extensive marketing of the province as the destination of choice for sea travellers.”

The new terminal will be designed to harness the latest sustainable design concepts, says Ms Qalinge. “This green and energy efficient terminal will meet all increased energy needs through conservation and renewable sources and incorporating green technologies into the terminal design.”

“The port will provide bunker fuel, the collection of solid waste and disposal of consumables by stevedores in line with the appropriate law. The terminal is centrally located, with easy access to major highways and is around 40 minutes away from Durban’s King Shaka International Airport.”

The port’s web-based Integrated Port Management System (IPMS), which it has used since 2015, enables key port operations to be managed online and in real time. Safe public access and viewing points will be installed at designated points in the terminal as part of this system. In addition, says Ms Qalinge: “Traffic management, congestion and security are challenges that need to be managed, because the terminal would still be located in one of the busiest ports on the continent, close to the beaches and on the outskirts of the city’s central business district.”

There are also plans to dovetail the new terminal with planned development around the Durban Point Waterfront and tourist attractions such as uShaka Marine World. “TNPA is working closely with the eThekwini Municipality which manages the City of Durban, to ensure that our development plans for the area are closely aligned in terms of traffic management, security and environmental management,” says Ms Qalinge.

The long-term plan is to create cruise hub ports on either coast of South Africa – Durban on the east coast and Cape Town on the west coast – that will eventually serve as homeports for international cruise vessels. Cape Town cruise terminal is being developed under a 20-year concession to V&A Waterfront (Pty) Ltd.

“These are supported by our other cruise ports of call – Richards Bay, Mossel Bay, East London and Port Elizabeth,” says Ms Qalinge. “MSC South Africa already uses Durban as a homeport. For now, Durban and Cape Town remain our key cruise ports, but if the market so dictates, we could look at similar cruise developments in other South African ports in the future.”

Speaking when KCT was announced as the preferred bidder for the Durban terminal, Ross Volk, managing director of MSC Cruises South Africa, told national media he was pleased with trends in the local cruise market. “The cruise market in South Africa is growing and the number of passengers coming on board has grown exponentially in the past ten years,” he said. In particular, he noted that there was increasing interest in cruises from black holidaymakers.

Ms Qalinge said that the KCT bid offered a winning combination. “We believe it brings together one of the largest and most successful cruise companies in the world, with a local black economic empowerment investment company that understands the unique needs of the South African market.”

The terminal will cater for simultaneous handling of two cruise vessels, with concurrent embarkation and disembarkation of passengers. “TNPA envisions collaborating with cruise operators, local and national Tourism Boards, relevant government departments and communities to market and promote Durban as a cruise tourism destination, while working with the terminal operator to ensure the terminal is operated sustainably,” says Ms Qalinge. “It will be operated on a seasonal basis in line with the cruise liner schedules.”

Initially planned as a single-storey building with a design that can accommodate a future second floor, eventually the development will incorporate an office block, multi-storey parkade and passenger boarding bridge for access to cruise ships in the subsequent phase. It will also have secondary uses as a conference and function venue and MSC Maritime Training Academy.

When advising a commercial cruise operator bidding for this type of development that incorporates both public and private elements, it is necessary to find a balance with the requirements and constraints of a government port authority, says Mr Pike.

“The biggest challenge is trying to negotiate a concession within the parameters of quite a conservative regulatory regime, the National Ports Act (NPA) in particular. There are simple constraints which Transnet is bound by under NPA. The challenge is always to try, to the extent any of those constraints present risks to investors, to find a solution which doesn’t run counter to legislative requirements. However, there has been a lot of goodwill on both sides.”

Ms Qalinge says she hopes that the new Durban passenger terminal will support increasing demand in the sector.

“We believe in the power of the cruise industry to stimulate economic growth, create jobs and strengthen the tourism offering of South Africa as a whole. The new terminal would assist in kick-starting development in the port area, fostering tourism related entrepreneurism and encouraging the development of landside offerings such as tour packages, souvenirs, etc. This multiplier effect would bring additional revenue and economic spinoffs into the city of Durban.”

In addition, the development of Durban’s cruise facilities will also help build the cruise offering along the east coast of Africa, says Mr Pike. “MSC Cruises has already developed a facility at Pomene in Mozambique where ships can discharge passengers and have a day on beach. It is part of MSC’s plan to exploit the region more.”

Given that the new KCT terminal will be available to all cruise lines to use, this promises to be good news for sustainable African cruise itineraries.