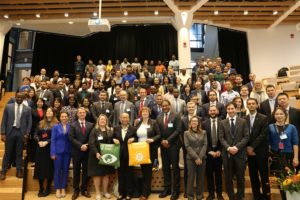 A global network of maritime technology cooperation centers has completed an impressive array of pilot projects over the past three years, helping to drive forward the changes which are required to reduce GHG emissions from shipping.

Five regional Maritime Technology Cooperation Centres (MTCCs) have been established under the Global Maritime Technology Cooperation Centres (GMN) Project, which is funded by the European Union and implemented by the International Maritime Organization (IMO), the United Nations specialized agency with a remit to develop and adopt standards for safer, greener and more sustainable shipping.   Between them, the MTCCs count 97 participating countries and have been working with 1,179 participating vessels to deliver sets of data which can help inform and support energy efficiency improvement. Port energy audits and retrofitting of domestic vessels for better energy efficiency are just two ways in which results are already being seen.

More than 160 people from 64 countries recently met for the third annual GMN conference, held together with World Maritime University (WMU) at the University’s premises in Malmö, Sweden (8-10 October).

During the conference, representatives from the five MTCCs reported on their pilot projects which assess a range of measures to help cut emissions in the maritime sector. These range from data collection in accordance with IMO MARPOL requirements, to assessing the impact of local improvements in ports, to reducing emissions in port areas.  “There is no silver bullet to decarbonise shipping – a basket of measures is needed ranging from framework conditions, standards and innovation to funding and economic incentives,” said Ms. Petra Doubkova, Policy Officer of DG MOVE, European Commission.    As well as pilot projects, each MTCC is involved in hosting and arranging regional and national workshops and seminars, to raise awareness of IMO’s energy efficiency measures for ships and to deliver capacity building through training.

The GMN project is continuing, through the MTCCs, to work with local stakeholders and push forward with raising awareness of energy efficiency in the maritime sector. The MTCCS is perfectly poised to continue to implement measures locally and regionally, in order to meet the challenges which action on climate change demands, in line with the Paris Agreement.

IMO has adopted its own initial IMO strategy on reduction of GHG emissions from ships, which envisages a reduction of CO2 emissions per unit of transport work, the so-called carbon intensity, as an average across international shipping, of at least 40% by 2030  – and, at the same time, pursuing efforts towards a 70% reduction by 2050, compared to 2008. It also envisages a reduction of total annual GHG emissions of at least 50% by 2050 compared to 2008, aiming to phase them out as soon as possible. The role of MTCCs is specifically captured in the IMO Initial Strategy.

“If international shipping is to achieve at least 50% reduction by 2050, what this really means is an average 85% emissions reduction per ship,” said Edmund Hughes, Head, Air Pollution and Energy Efficiency, IMO. “The MTCCs are looking into technical and operational measures for energy efficiency – and this is why the MTCCs are so important, and we commend them.”

About the GMN project

The GMN project is funded by the European Union and implemented by the International Maritime Organization (IMO).

Four years on, and thanks to a €10 million funding contribution from the European Union, the GMN project has come into fruition and five MTCCs have been established and have, to date, involved more than 2,210 participants in more than 50 maritime energy efficiency workshops, as well as delivering on pilot projects. They are MTCC Africa; MTCC Asia; MTCC Caribbean; MTCC Latin America; and MTCC Pacific. EC funding for the project has now been confirmed until September 2020. 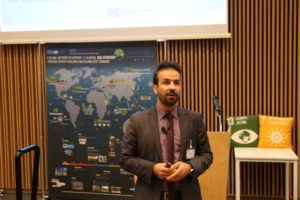 DocksTheFuture is an EU  H2020 project with a focus on the Energy and Climate macro area of the Project. He started with the main goal of the project which is To define the Port of the Future, meant as a near future (2030) which should face Challenges related to but not limited to: simplification and digitalization of processes, emission reduction, energy transition, the use of renewable, & electrification, smart grids, dredging, port-city interface, and etc.

Then continued with the introduction of the project partner, project assets, specific sub-contractors, and the platforms of dissemination the DTF news.  Later he continued with the  Identify appropriate KPIs (“Key Performance Indicators”) and relevant monitoring and evaluation actions Leading to the “Port of the Future Road Map for 2030” that will include a number of exploitation elements such as tools for evaluation and transferability of Port of the Future solutions, R&D and policy recommendations, training packages and the creation of a “Port of the Future Network of Excellence”.

It also mentioned that To connect the concept of Future Ports with the UN Sustainable Development Goals by 2030, 5 Macro area, with their 36 related-Strategic Objectives were defined within the project work package.2.

It also added that in 2017, AIVP started collaborating with Port Expertise under the broader framework of the European Project Docks the Future.  A survey was done in 2018, to understand the priorities of port-city actors, by asking their leaders or top managers. To do the survey, AIVP invited 3500 organizations worldwide, of which 224 responded to the call.

The survey has 68 questions, structured in five key topics, considering relevant for port‐city relationships: spatial organization, environment, society and culture, economy and governance.  Briefly the results of the survey mentioned as per below:

In the end, it was concluded that the survey shows port city actors recognize the importance of several key topics such As Sustainability, energy transition, circular economy, or protecting biodiversity emphasized, but still the Economic focus of ports remains dominant, not recognizing these new issues as top priorities.