“A new study on transport infrastructure charging, due this summer, tackles the thorny question of how to allocate the costs of pollution in European Ports. Isabelle Ryckbost considers its implications.” 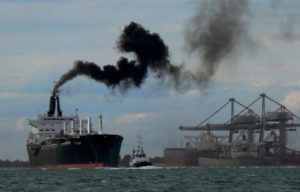 A new study on transport infrastructure charging, due this summer, tackles the thorny question of how to allocate the costs of pollution in European ports. ESPO’s Isabelle Ryckbost considers its implications

In May this year, the Commission is expected to publish the final results of a study that was launched at the end of 2017 on ‘Sustainable Transport Infrastructure Charging and Internalisation of Transport Externalities’.

Some of the main preliminary findings of the study, which is being carried out by a consortium led by the consultancy CE Delft, were presented last December at a special event organised by the Commission. It was revealed that the total external costs of transport amount to the equivalent of around €1,000 billion annually, which corresponds to almost 7% of EU28 GDP.

The main contributors to this are environment (carbon, noise and pollution), accidents and congestion. Road is the largest contributor, accounting for 75% of the total external costs (with accidents as the maior cost) in absolute terms. For all transport modes, the total costs (external and infrastructure) are substantially higher than what the user pays.

With regard to the maritime sector, the study has selected a mix of 34 large and small ports and has extrapolated the costs on the basis of this sample. The makers of the study pointed out that they have faced limitations with regard to maritime transport data and the extrapolation is more uncertain for this sector than for the other modes. It was also said that there were many data gaps for infrastructure costs that have been filled by extrapolation.

Evidence that can’t be ignored

The final study, which is expected to be made available at the end of April or the beginning of May, will include a break-down of the costs per Member State and per mode and will also list all possible policy options. It will certainly open – or to put it more accurately, re-open – the debate on the ‘user and polluter pays’ principle and is expected to be one of the big files which will be waiting on the table of the new Parliament and Commission after the EU elections in May.

Awaiting the final results of the study and without of course anticipating the debates among our members, I would like to make a few observations.

Primarily, the preliminary results show that the externalities of transport are high. We cannot put these figures aside. It is clear that transport, as an important pillar of the economy and of society, must become safer and more sustainable. It is also clear that it must decarbonise.

Benefits as well as costs

Secondly, the infrastructure and external costs are high, but what about the benefits? Based on other EC studies and reports, transport accounts for more than 9% of the EU Gross Value Added – and who is the beneficiary? Is it only the consumer, the commuter, the tourist, the producer?

I believe that the beneficiaries of a well-connected, smart, efficient, sustainable EU transport network are to a large extent the 500 million Europeans. Transport is an enabler. Taking away this connectivity and mobility comes at a higher cost in terms of growth and cohesion.

Thirdly, what about ports? Ports are engines of growth. They are much more than loading and unloading places where the maritime connects with the hinterland. They are multimodal nodes of transport, energy, clusters of industry – which helps avoid unnecessary transport.

Ports are also nodes of the blue economy as well as being digital hubs. They are an economic ecosystem at the service of the region and the wider community. As stewards of sustainable growth, ports care about their externalities and those of their stakeholders. They monitor, develop strategies and invest to mitigate the externalities. Here also, given their complexity, it is very difficult to split the bills, or to attribute every cost to a user.

Don’t place the burden on ports

In addition, we must avoid a situation in which ports, which are to become more and more financially autonomous, are being used in that debate as the convenient tax collector. If the external costs of transport are to be internalised, it should be done in the right places.

Even if port managing bodies decide, on a voluntary basis and as part of their business strategy, to apply rebates for certain traffic and certain categories of green ships, any policy on internalisation of external costs should target the polluter at the source and cannot lead to an obligation for ports to punish for externalities or reward environmental performance.

We shouldn’t deprive ports of the limited resources they have available to build the necessary infrastructure and boost economic growth at national and local level.

I believe that the reduction of externalities must be at the core of the upcoming debates and must drive any forthcoming policies. Support for investments in new clean technologies and infrastructure and clear targets and standards must come first.

For instance, the introduction of the 0.1% sulphur limit on marine fuel in the Baltic and the North Sea in 2015 has resulted in tremendous emission reductions in the area, often up to 80%. This could never have been achieved through environmental discounts.

Price mechanisms can work to some extent but are in themselves not enough. However, increasing transparency and awareness of the environmental footprint of the supply chain might have tremendous potential to change behaviour and lower the transport externalities. It is thus time to take the shipper on board in the debate.

Isabelle Ryckbost was writing for GreenPort’s Spring 2019 issue. Read her thoughts on the power of citizens, which featured in GreenPort’s Winter 2018 issue.