The Belt and Road Initiative (BRI) is a development strategy proposed by the  Chinese government that focuses on connectivity and cooperation between Eurasian countries, primarily the  People’s Republic of China (PRC), the land-based Silk Road Economic Belt (SREB) and the ocean-going Maritime Silk Road (MSR), since 2013. 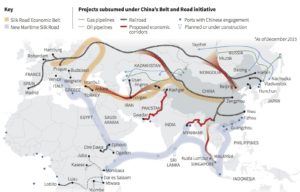 It aims to improve the slowed-down China’s growth and strengthen its leadership role in the world by connecting China to countries in Europe, the Middle East and elsewhere over large infrastructure projects which cover nearly 70 countries.  the Belt and Road are actually six routes across central Asia and South Asia and one maritime route from the South China Sea through the Indian Ocean ending at the Suez Canal. 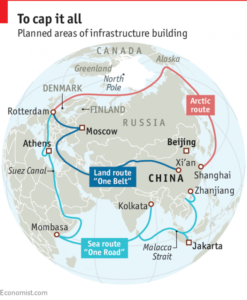 As a result of human activities’ impacts on the earth ecosystem, global warming and climate change created. Global warming always has been seen as a threat to our societies, but it surprisingly creates some opportunities too! As an example, Arctic has become viable for shipping routes with great potential to contribute to the international maritime transport. As a result, the north-east Polar passage offers China a faster sea route as it would shave almost 20 days off the current time through the Suez Canal traditional route.

On January 28, 2018, China published the Vision for Maritime Cooperation under the Belt and Road Initiative which emphasized on the Arctic as one of the priorities. The Policy states that China is developing to build a “Polar Silk Road” together with Arctic coastal countries, particularly  Russia. It draws a picture about objectives, guiding principles and actions of Chinese contribution to the Arctic affairs.  The Polar Silk Road is planned to connect with the Eurasian Economic Union.

The Vision declares the future Chinese development goals in Arctic region, including commercial, scientific, environmental preservation, and resource extraction activities along the Chinese Arctic interests with the Belt and Road Initiative (BRI). For this purpose, the Chinese companies and enterprises have been encouraged to invest in building infrastructure in the Arctic routes and carry out the commercial voyages to pave the road to form the “Polar Silk Road”. Furthermore, this Chinese strategy keeps an eye on the development of gas, oil, mineral resources and other non- fossil energies, the fishing industry and tourism. It gives the guidelines to have joint economic cooperation with Arctic States, meanwhile respecting their cultures and preserving Arctic natural environment. In other words, it stresses the “peaceful utilization” of the Arctic under multinational treaties such as the United Nations Convention on the Law of the Sea (UNCLOS).

China has been active in the Arctic region over the last decades. An example is its first Arctic research station,  Yellow River, in the Norwegian archipelago of Svalbard in 1999, and Chinese icebreaker Xue Long (Snow Dragon) which sailed across the Northern Sea Route along the Russian coastline in the summer of 2012. Later in 2017, the research vessel Xue Long became the first Chinese ship to navigate the three major Arctic shipping routes: The Northwest Passage, Northeast Passage, and Transpolar Sea Route. The Chinese borders have not extended to the Arctic, to have direct influence in Arctic activities and regional policies. However,  China is one of 13 “observers” to the Arctic Council since 2013 after two failed attempts. 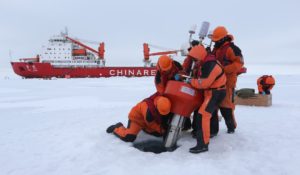 The Arctic shipping routes, particularly the Northern Sea route, are called “blue economy corridor” due to saving in costs and time for connecting Western Europe and China.   In 2013, Chinese shipping company COSCO sailed the first-ever multipurpose ship through the Northern Sea Route. In addition, in 2015,  five COSCO vessels sailed through the icy route, which is a record for this company. In 2015, Chinese banks lent $12 billion to the Yamal liquefied natural gas (LNG) project, which lies in the middle of the Northern Sea Route and is expected to supply China with four million tonnes of LNG a year, according to the state-run China Daily. Furthermore, China building Arctic cruise ship for Polar Silk Road which is its first polar expedition cruise ship expected to be completed by August 2019.

China cannot physically claim Arctic territory, but it can buy stakes and influence the energy, commercial, and geopolitical benefits. The benefits can be listed as follows:

First, the region estimated to account for energy natural resources of approximately 13 and 30 percent of the world’s undiscovered crude oil and natural gas accordingly.  Second, is the attraction of shipping routes as the two paths of Northwest Passage (NWP) and Northeast Passage (NEP), as the introduce quicker substitutes to connect both European and North American energy and goods to China. A third Arctic passage, the Transpolar Sea Route, as shown below, cuts through the Arctic between the NWP and NEP through international waters but can only be accessed by the heaviest icebreaker ships. See the below figure. 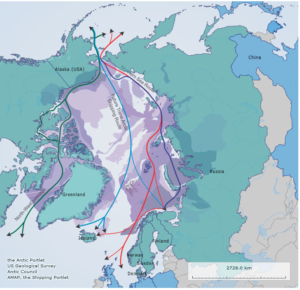 The third benefit comes from enhanced security in shipping. The ability to transport goods and materials through Arctic waters provides an alternative trade lane that replaces as an alternative to the maritime choke point at the Strait of Malacca, as well as other pirate-infested waters in the Indian Ocean and the Red Sea. Lastly, China can strengthen its geopolitical, political and geoeconomic posture by its more active commercial presence in the Arctic.

China claims to have the right to sail the Polar route under the United Nations Convention on the Law of the Sea (UNCLOS), which clearly allows freedom of navigation in international waterways. However, it is really ironic, as China rejected the international Permanent Court of Arbitration statement about China violating the UNCLOS in the South China Sea!

China’s increasing activities and dominance in the Arctic region has raised the concerns of Arctic coastal states over its long-term strategic goals, as well as possible military deployment. In addition, it has caused some environmental concerns. As the Arctic is a very environmentally sensitive region, any projects backed by foreign states need to guarantee the protection of the Arctic environment. It is therefore important to examine the BRI in the Arctic from an environmental perspective. China specifically promised the Arctic Council to protect the environment, protect the ecosystem, and address climate change.

Furthermore, the Arctic Council argues the requirements of shipping in the region such as lack of communications, charts, sufficient search and rescue (SAR) response, and also the environmental response to events such as oil pollution from tankers. On the other side, China has asked contribution to Arctic affairs like conducting scientific surveys on navigational routes, establishing land-based stations, execution of research on climatic and environmental changes in the Arctic and to increase cooperation with coastal states in clean energy.

Russia is partly keen for Chinese investment in its infrastructure because capital from the West has remarkably reduced. However, some Russians politicians consider China’s plans more suspiciously. They concern that China ignores that Russia should exercise full control over shipping along the Northern Sea Route. Nevertheless, China has not shown any interest in challenging Russian jurisdiction in the Northern Sea route and is willing to follow Russian. Moreover, Chinese ships are generally responsible and are not known to cause environmental disasters. The one Belt and one Road Initiative, therefore, appears to be in synergy with China’s Arctic Policy when it comes to Arctic transport.