President Donald Trump announced Tuesday that the U.S. will leave the 2015 Iran nuclear agreement, a signature achievement by his predecessor that he’s long derided as “the worst deal ever.” That could result in renewed sanctions on the third-largest crude producer in the Organization of Petroleum Exporting Countries. The bulk of Iran’s oil exports find their way to China, India and Korea, according to Bloomberg tanker tracking. 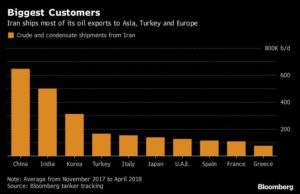