The 20th Summit between the European Union and the People’s Republic of China took place in Beijing July 16, 2018, in Beijing. 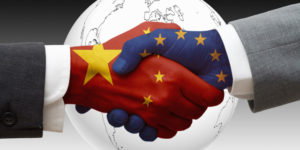 At the third meeting of the EU-China Connectivity Platform, held in the margins of the Summit and chaired for the EU by Commissioner Violeta Bulc, the two parties reaffirmed their commitment to transport connectivity on the basis of respective policy priorities, sustainability, market rules and international coordination.

The exchanges focused on:

The joint agreed minutes of the Chairs’ meeting are available online, along with the list of European transport projects presented under the EU-China Connectivity Platform.

The TEN-T related projects included in the attached list have been presented by the Member States concerned on a voluntary basis, in order to explore solutions to cover a potential financing gap, without prejudice of the final decision on financing which could be taken. The importance of a level-playing-field among investors and project promoters, of a geographically balanced list of projects, reciprocity and compliance with applicable EU rules and standards was recalled during the Pilot Expert Group meetings. As agreed in the minutes of the Chairs’ meeting a rolling implementation mechanism will be set up in view to evaluate the list of jointly identified pilot projects.

3. The Hungary-Serbia Railway (Hungary and Serbia)

5. Projects in the Orient/East-Med Corridor in the Western Balkans Region

6. The Corridor 5c Highway Project in Croatia and Bosnia and Herzegovina

7. The Railroad Project from Koper to Divaca (Slovenia)

16. Development of the Bratislava Trimodal Terminal(Slovakia)