Since 1996, the European port sector has been monitoring, through the EcoPorts network, the main environmental concerns of port authorities in Europe, writes Isabelle Ryckbost, secretary general, ESPO. Port authorities can take their choice out of a list of 34 environmental issues they would like to focus on. It is important to let them pick their own top 10 most important environmental priorities because it is clear that ports will primarily address and work on issues they consider as a concern. Since this exercise has been repeated several times, it is interesting to see which issues went down in the ranking and which are the newcomers over the years.

The latest Top 10 which we issued in November 2017 shows that air quality has been leading the list as shown in the following photo. This does not come as a surprise given the fact that air quality has been on top of the EU political agenda for years. There is a sense of urgency now that people around the ports are enjoying the benefits from the implementation of low sulphur areas (SECAS) put in place in 2015 and now the time path for the global sulphur cap on marine fuels has been confirmed. The introduction of the new NECA’s which will also oblige new vessels operating in these areas to comply with lower NOx emissions standards as from 2021 is another reason. Air quality is important if one knows that more than 90% of European ports are located in or very close to an urban area. Any reductions have a direct impact on the public health and quality of life of many people living around the port.

In recent years, one of the significant changes in the priority ranking of the European ports is for energy consumption . Energy consumption is the second biggest priority for European ports since 2016. As shown in the below table, it only entered in the top 10 in 2009 but has gained in importance since then.  One of the main reasons here is the link between carbon footprint and climate change that has become an important driver of environmental policy at ports over recent years. That also explains why “Climate change” – which covers energy efficiency, GHG emission reduction and adaptation – is entering the top 10 as the first and only newcomer since 2013. The Paris Agreement has really been a milestone. Ports are increasingly developing initiatives to reduce the carbon footprint of the port and their stakeholders. These initiatives range from monitoring tools to investments in renewables and carbon-free energy, the development of strategies to decarbonise the industry in the port or even more difficult decisions to give up certain activities. For example, the Port of Amsterdam has decided to become coal-free by 2030. 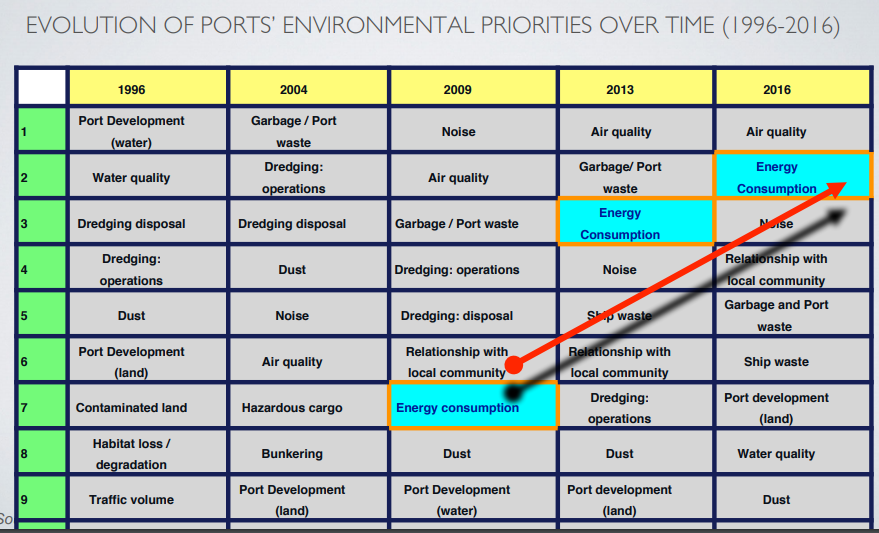 Source: Produced by Author,  from the statistics and annual reports of ESPO

This has led 57% of the European ports to develop energy efficiency programmes. However, this percentage will likely increase, considering the focus that the EC on efficiently addressing port externalities as highlighted in the European Ports Policy.  Furthermore, the International standard ISO 50001 paving the way towards efficient port energy management. According to the ISO organization and European standards, ports are starting to develop Energy Management Plans (EnMPs), either at a port authority or at a terminal operator level, as part of their overall “green” port policy, according to the article from Boile.M, Theofanis.s, Sdoukopoulos.E, Plytas.N, 2015.

Noise, number three on the Top 10, remains an important concern for many European ports. It is often also a driver for differentiated port charging. In view of mitigating the noise pollution from vessels, different ports are rewarding the use of onshore power supply at berth. This is certainly the case for important cruise ports where the ships are berthing near built-up areas.

Water quality and also dredging seems to be more and more a priority for European ports. Different ports are situated in sensitive areas and look for innovative ways to use the dredging sediments. For example, the Port of Dublin has invested almost €2 million in buoys to monitor the impact of dredging on the marine environment.

Managing the waste caused by port activity or generated in the port (priority number six) has apparently become less challenging as it has moved down the current list of priorities. It was the number one top priority in 2004. Ship-generated waste only occupies the ninth place in the latest top 10. Ports seem to have their ship waste reception schemes under control. It remains to be seen what will happen with this priority once the current EU framework is reviewed. It’s clear that each port in Europe has its environmental agenda. It often mirrors the geographical situation, the activities of the port, its management and governance model, but having this top 10 enables us to better communicate sector concerns and serves as an important indicator for an organisation like ESPO to prioritise its work. Finally, it can also guide those ports who may need to keep their finger on the pulse more.