BiLOG is an agreement signed by La Spezia Port Authority and Municipality of Piacenza in order to create a special event on sustainable, connected and resilient topics with a European spin. The Forum will focus on regional and European dimensions, on the transport and maritime investments, highlighting the importance of cohesion between the players of the logistics chain.  For more information about BiLOG, please click here: https://www.bilog.it/

During the two days of the event , the Programme sessions were held as in:

• Maritime and logistics facing the 2030 trends
• The Container market and its challenges
• The new TEN-T Regulation and the CEF 2 opportunities
• Connected ports and logistics
• La Spezia port system and the role on the Santo Stefano Dry ports
• Sustainability and circular economy: the Bio LNG case
• Rail last mile and e-logistic
• Blue Growth
• Port of the Future

Within the last session, four European H2020 initiatives to raise the environmental of the ports presented: COLEARIS, PIXEL, PortForward, and  Docks The Future .presented. 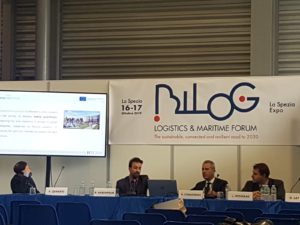 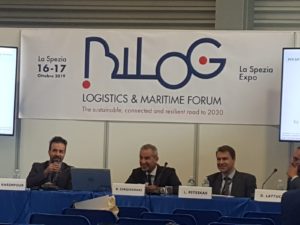 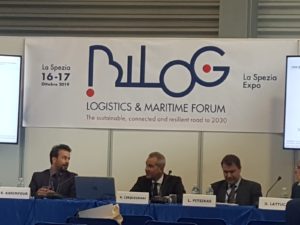 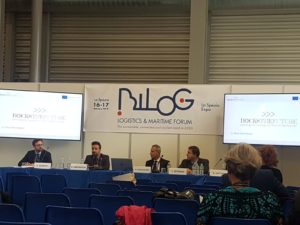 DocksTheFuture presented with the main goal of the project which is: To define the Port of the Future, meant as a near future (2030) which should face Challenges related to but not limited to: simplification and digitalization of processes, emission reduction, energy transition, the use of renewable, & electrification, smart grids, dredging, port-city interface, and etc.

Then continued with the introduction of the project partner, project assets, specific sub-contractors, and the platforms of dissemination the DTF news.  Later he continued with the  Identify appropriate KPIs (“Key Performance Indicators”) and relevant monitoring and evaluation actions Leading to the “Port of the Future Road Map for 2030” that will include a number of exploitation elements such as: tools for evaluation and transferability of Port of the Future solutions, R&D and policy recommendations, training packages and the creation of a “Port of the Future Network of Excellence”. It also mentioned that To connect the concept of Future Ports
with the UN Sustainable Development Goals by 2030, 5 Macro area, with their 36 related-Strategic Objectives were defined within the project work package.2.

It aslo added that in 2017, AIVP started collaborating with Port Expertise under the broader framework of the European Project Docks the Future.  A survey was done in 2018 , to understand the priorities of port-city actors, by asking their leaders or top managers. To do the survey, AIVP invited 3500 organizations worldwide, of which 224 responded to the call.

The survey has 68 questions, structured in five key topics, considering relevant for port‐city relationships: spatial organization, environment, society and culture, economy
and governance.  Briefly the results of the survey mentioned as per below:

At the end , it was concluded that the survey shows port city actors recognize the importance of several key topics such As Sustainability, energy transition, circular economy, or protecting biodiversity emphasized, but still the Economic focus of ports remains dominant, not recognizing these new issues as top priorities.